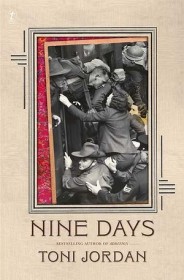 I’ve seen Toni Jordan speak at quite a few events, and I was fortunate enough to hear her again towards the end of last year at the Ballarat Mechanics Institute. It was just after the launch of her latest novel, Nine Days.

I knew about the general premise of the book before I bought it – that Jordan was inspired by a photograph from the Argus records. (The image is on the cover of the book) But what I didn’t know was that the nine days of the title, refers to the plot structure. The novel tells of nine days, spread across seventy years, which transform the lives of each member of the Westaway family.  Each chapter is narrated by a different member of the family as they face their transformative day. However the plot is not structured chronologically. This device is a wonderful tool for driving the plot. Readers are left to fill in some blanks when the novel jumps from 1939 to the weeks immediately after the September 11 collapse of the world trade centre in 2001. We wonder who the new narrator is and how is she related to Kip, the character we’ve just grown to love in chapter one. This continues through the book, and it’s Jordan’s skill as a storyteller that ensures that readers don’t feel dislocated, instead urging them on with a new character who is just as fascinating as the one before.

What I enjoyed about the novel, from both a readers and writers perspective, was the sense that there is a tenth character in the novel – the suburb of Richmond, in inner Melbourne. Evoking a sense of place can be difficult, and when the novel is set across seventy years I imagine there are challenges. Anyone who has visited Richmond post 1970 can likely imagine that it was a very different place in 1939. Situated on the edge of the CBD, along the Yarra, Richmond was initially a working class area, as Kip points out as he wakes up early, heads outside to begins his walk to work:

Soon it’ll be pinky-light, twinkly-light and the stars will turn in for a bit of a nap themselves but now in the cold dark you can feel the great city waking. If I looked down the side, past the gate to Rowena Parade, I’d see men in their dirty boots and worn coats wrapped tight, heading round the corner, down Lennox Street and across Swan to the IXL factory, or a bit further along to Bryant and May. I can almost hear the tramp of them, boots on bluestones, caps pulled over ears. These blokes are the workers. There’s a whole different lot in white shirts and ties and waistcoats and hats with newspapers under their arms who also walk down Lennox and Swan to catch a tram to the city. Our house here in Rowena Parade is the spot where blokes get divided into proper workers and office men.

Me, I’m one of the proper workers. You can smell every factory in Richmond from our little backyard when the wind’s right. Between the end of the footy finals and Easter the hot sweet of the jam hits you first, then the tomato sauce, next burning malt and hops. Now in the middle of winter there’s nothing but the tannery and the Yarra, and it’s like the dunny cart had a permanent spot in the lane so I’m not standing around to breathe it in. (Pg 2-3)

Richmond has a daily habit, a smell, a life at night and a life in the day. This continues through the novel. Sometimes we feel it in the passages set at night, or in alleys, schoolyards or its contrast to the leafy suburbs on the other side of the river.

The current day Richmond is just as evocative. Further into the novel Alec describes to us a different Richmond – still the slow trek to and from the city for work:

Picture this: Punt Road at twilight. Leaves blowing along the gutters, bumper shining against bumper, flattened light coating everything in its milky glow. Cars filled with people going home to the bosom of their loving family. The vermillion of glossy paintwork, the emerald of the trees around the oval… I am sitting on the footpath between the pub and the brothel, leaning against a white picket fence. (pg 201)

It must be around nine when I walk down Lennox Street to Bridge Road, if I was on my bike, I’d go via Victoria: that part of Richmond is way cooler, like being in Saigon. Trust my olds to live on the hill in the boring Anglo part. (pg 221)

Richmond changes through the novel. It moves from a place of gossip and backroom secrets and shame to a place where a teenage boy can stand outside a brothel without even considering that there might be a consequence for being seen there. It becomes a place where the class difference has been replaced by a cultural difference, between ‘like being in Saigon’ and a ‘boring Anglo part’.

It’s the strong characterisation of Richmond which adds to the emotion of the novel, and brings us back to the photograph of the soldier leaving for war that graces the cover and provided the inspiration for the story. It can be assumed that readers have an understanding that there were great numbers of young men who left for war on the other side of the world. But rather than this being an understanding of fact, it becomes more emotive by the way that Richmond has been characterised through the novel.

By giving such a strong sense of place, the people in it, the gossip, the routine, the smell, the intimate knowledge the characters have of the place both day and night, the place becomes harder to leave.  It creates an emotional grip for readers to imagine the characters fighting on the other side of the world. It highlights just how isolated those young men were away from a place that, without them knowing it, had shaped their personality and imprinted itself on their memory and psyche. It creates a sense of nostalgia within the reader, without Jordan even needing to move the plot from Richmond. We can imagine the gaping hole that was left when those boys went to war, and when some didn’t return.  And while years down the track the place is full of ‘pubs and clubs and restaurants’ p 221 the changing shift of narrators reminds us of the history that went before.

Through chapters of birth and death, love and loss, the suburb comes-of-age along with its inhabitants, and makes the novel hard to read without clearly imagining Richmond as part of the family.